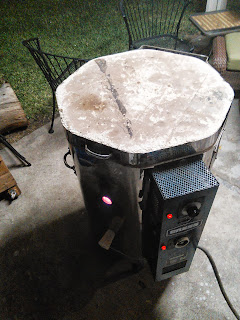 I have finally fired my kiln!

On Saturday I fired my first bisque and on Monday my first glaze. Neither firing went perfectly but the results were better than I dared hope.

The bisque firing was supposed to be cone 06 but I ran out of time (I was going to a play) and had to turn the kiln off early. I am not sure how close it got to the right temperature. My 05 and 06 witness cones survived unscathed but the ware was within the bisque range so it must have been close enough. I had a teapot, 4 cups and 7 bowls. I did loose one bowl to cracking but I believe it had been weakened by handling before the firing.

For the glaze firing I gave myself all day to get it done. I was aiming for cone 5 so I set the kiln for normal speed, 2150°f, and put the time at 12 hours, which is the longest it will go. After 8 or so hours I started using my shade 10 welding goggles when looking in the peephole to check the cones. After 11 hours the #4 come had bent over completely. By 12 hours the #5 cone had bent to 90° (pointing at 180° for those of you who love polar coordinates) so when the timer went off (sounding like a kitchen egg timer) I shut everything off, and went to bed. I unloaded the next night. 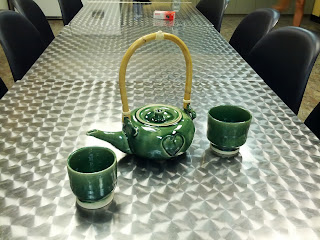 I fired the teapot, the 4 cups, and one bowl all with the same Laguna Clay forest green (ms-4) glaze. The glaze all melted nicely and the kiln wash on the shelves saved me from the sleight drips I had on one of the cups. The application was a little spotty because I did not have enough glaze to dip the pieces and had to apply it with a brush. There was a fair amount of flow of the glaze and the lips of the cups came out a bit thin but nothing to worry about. I got a little pinhole-ing of the glaze and clay sagging on a bowl that was on the bottom shelf so I may need to be careful what I put down there.

The teapot and two of the cups are a donation to an auction held by a charity called More Than Me that a co-worker of mine works with. I am proud of the way they came out and I hope that it can bring in a good donation.

All in all a success!